Update - Version 1.11 - Fixed Bugs and a Look into Moisture Sensors

After checking on my system yesterday I noticed it stopped updating the LCD display and operating the controllers within a couple hours after powering on the device. The issue was very simple to solve, all it involved was changing an "if" statement to a "while" statement. Also the updated version notifies the user when it cannot initialize the SD card during start up via the LCD display. 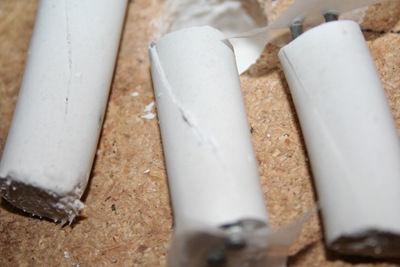 I've been googling moisture sensors for the past week or so. The most ideal product I found was the Vegitronix Soil Moisture Sensor but they run roughly $30 a piece which isn't a very ideal price. I then stumbled upon a tutorial for home made moisture sensors that uses galvanized nails to take measurements by passing a alternating current between the probes while taking readings on the one that isn't currently emitting a current. The probes are set in gypsum plaster to avoid corrosion from salts and to make sure they don't touch. During the next week i will be working on making a set of my own, once they are complete i will run some tests to get a better understanding on how to make them work accurately in the next update.

I'll be keeping you guys posted, thanks for listening in.
Posted by Nik G at 12:34 AM